In Camelot, talk with King Arthur.

2. Deposit all your weapons and armour, and hitch a ride from Port Sarim to Entrana. Upon arrival, talk to the High Priest. He will say he does not care about the Grail, but then a crone will speak up, telling you to go to the aid of the Fisher King. She speaks in riddles, and eventually tells you to go to Draynor manor to pick up some whistles.

3. Head to McGrubor's Forest, and on the west edge you'll see a house. Go inside and talk to Sir Galahad. Ask him why he left the grail at the castle, and why he left in the first place. He will give you a napkin which he took from the land of the Grail.

4. After you've obtained the Napkin, head to Draynor manor. Go up until you see professor Odenstine, and then go through the door to the southern room. If you have the napkin in your inventory, then you should be able to see the whistles. Pick up two whistles and head to Brimhaven.

5. Grab your weapons, armour, food, napkin, whistles and anti-poison potion and head to Brimhaven. Keep heading west until you hit some Scorpions. Head north at the scorpions, and you'll see a tower. Stand under it, and blow your whistle.

6. You are now teleported to a village. Walk until you find the Black Knight Titan (lvl 120). Kill him, delivering the final blow with Excalibur, and continue on into the Village.

7. Once you reach the village, walk along the river to find the Head Fisherman. When you talk to him he'll tell you about the Bells. Go towards the castle, pick up the bell, and ring it. You will be teleported into the Castle.

8. Once inside the Castle, talk to the King, who is upstairs. He will tell you about his son, Sir Percival. He will ask you to find him to become the new king.

9. Head back to Camelot and talk to King Arthur. He says that Percival went onto a long and dangerous quest searching for some boots. He will give you a Golden Feather. Go to the Goblin Village, and prod the sacks in the easternmost house. Then open it. The King's son will pop out. He says that he found the boots, and was returning home when he fell into a goblin trap. Give him a whistle, and meet him back at Camelot.

10. Speak to King Arthur. He calls you one of the greatest knights of the round table, and gives you your reward. 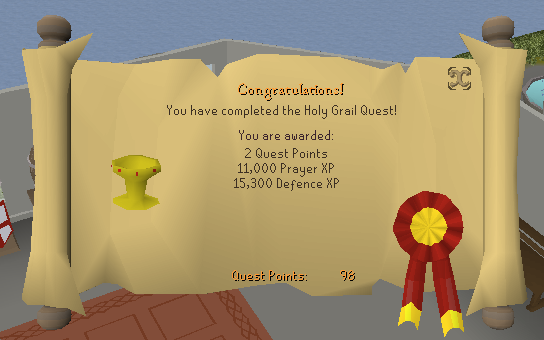