Talk to King Narnode Shareen in the Grand Tree.

Recommended items
Although these items are listed as "recommended", it is impossible to do the quest without having them.

1. To start the quest, talk to King Narnode Shareen in the Grand Tree [map]. He tells you that the 10th Squad of the Royal Guard has disappeared. Tell him that you are going to help you to start the quest.

2. Climb up to the top of the Grand Tree, and take the Gnome glider to Karamja. Head north until you reach the shipyard entrance. Try entering the ship yard, and a guard will stop you. Show him the Gnome Royal Seal, and he will let you enter the shipyard. Once you are in the shipyard, speak to G.L.O. Caranock. He tells you that the 10th squad has never reached the shipyard.

In the next steps, you will need Gold Bar, Ball of wool, Monkey bones/corpse, the potions, the fighting equipment, including food, and the teleportation.

3. Head back to the Grand Tree, and talk to King Narnode Shareen again. He tells you that you must speak with Daero, who is upstairs in the Grand Tree.

4. After giving the orders to Daero, he tells you that you are to be taken south of Karamja. When speaking to him, go through all of the options. When you have done so, select the "Leave..." option, and Daero will blindfold you and take you to the Flight Commander Waydar.

5. You will be taken to the Underground Military Glider Hangar. Talk to Daero again, who introduces you to Waydar. After speaking with them, head a bit south-east and search the crate next to the reinitialisation panel.

When you search the crate, you'll discover that it's full of spare controls. You can take one, so you can view the solution to the puzzle that you need to complete. To do the puzzle, operate the Reinitialisation panel (which is next to the crate).

If you're unable to solve the puzzle, you can pay Glough 200K (he is located in his house southeast of the entrance of the Grand Tree). 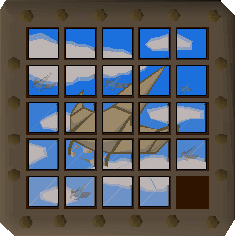 6. After you've solved the puzzle, talk to Waydar. He tells you that you should have food, and says that the local creature are poisonous. If you don't have all the items, you can go to the south of the hangar, and use the portal to exit it. You will be taken to the Gnome Stronghold.

8. You are now on the Ape Atoll. Beware of the poisonous snakes and spiders in the area, and head to the north-west [map]. You will be shot by some monkey archers, and sent to a jail.

10. When you've managed to get out of the jail, head north. Remember to avoid the poisonous animals there, as they will poison you and hit very high. Turn on your protect from range to avoid getting hit by the monkey archers, then head east, and then south, to find Garkor, the Sergeant. 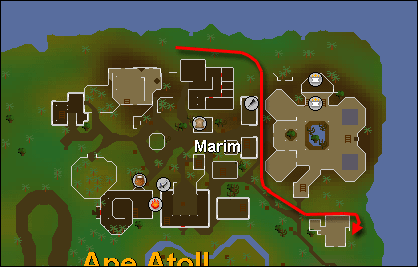 11. Turn on your protection from missiles, and head to the house south in Marim.

Don't go to the center of the house - be sure to stay close to the walls. Search the crate closest to the trapdoor, east in the room.

Then, search the south-eastern crate, and you will discover that there is a hole in it. Climb down, and go to a crate to the north-west. Search it to find a monkey amulet mould.

12. Turn on your protection from missiles, and head south, past the graveyard, and climb up the bamboo ladder.

Then, head south, and you should meet Lumdo again. Don't talk to him, but head west to a dungeon, which should be shown on the mini-map as an exclamation mark.

13. This dungeon is fairly dangerous. Sometimes, your screen shake and you will hear a rumbling sound. When this happens, run under one of the ledges, otherwise you'll be hit a few life points. Also, you should have plenty of food, and preferably some energy potions.

When you've entered the dungeon, follow the tunnel to the east. Head north, and follow the tunnel all the way to Zooknock, who is at the end of the whole dungeon. Speak to him, and when you have done so, use the gold bar, monkey bones/corpse, the monkey denture and the monkey amulet mould with him (do not bury the bones!).

14. Get back to the surface. It is suggested that you teleport to Al Kharid, fill up your inventory with fresh food and full potions, take the glider to the Grand Tree, talk to Daero and get back to the Crash Island. Ask Lumdo to bring you to the Ape Atoll, and head north-west on the island to get in jail.

15. Get out of the jail, and head to the temple. When you enter it, you should turn the Protect from Melee on.

Climb down the trapdoor, and go either north or south, and you'll see a large wall of flame. Use the gold bar on it to get the Monkeyspeak amulet (M'speak amulet). Climb up the ladder again, and go back toward the jail.

16. Go to a house just west of the jail [map]. Wait until the the Monkey's aunt leaves the place, and talk to the monkey child. You should talk to the child just after the aunt has left.

You tell the child that you are his uncle, and he will say that his aunt asked him to get bananas. Keep sure that the aunt isn't coming, and pick 5-6 bananas and give them to the child. Then, ask the child if you could borrow his toy, which is a monkey talisman.

17. Now, head back to the dungeon where the squad's mage, Zooknock, is. Use the monkey talisman with Zooknock. He will give you a Monkey greegree, and then you will see a cutscene where Waydar and G.L.O. Caranock are talking.

19. When you're back on the Ape Atoll, hold the Monkey greegree. Now, you won't be attacked by the various poisonous animals on the island, nor the monkey archers! Enter where you used to enter, and open the bamboo gate to enter the city of Marim. Then, head to Garkor and talk to him.

20. Talk to one of the guards, who won't let you in. Then, head to the other site of Marim, and talk to Kruk.

Tell Kruk that you wish to talk to Awowogei, and he will escort you to him.

21. Speak to Awowogei, and you will propose an alliance. Awowogei will ask you to free one of the monkeys that are in the Ardougne zoo. Go out of Awowogei's house, make sure that you are somewhere in safety, and teleport to Ardougne.

23. Go back to the Grand Tree, but do not teleport or use the tree spirits; your monkey will disappear if you do so. Head back to the Ape Atoll again, be sure to wear the Monkey greegree, and go to Awowogei. You won't need to talk to Kruk again, just talk to the guard outside Awowogei's house.

24. Go oustide and talk to Garkor, who shows you a cutscene. Talk to him again, and he gives you a sigil. Do not wear the sigil until you are ready to fight.

25. Teleport out of the Atoll, and prepare for the fight a level 195 Jungle demon. Here are some tips:

26. When the fight is over, talk to the gnomes, and you will be teleported to the Ape Atoll. Telport out of the Atoll, and go to King Narnode Shareen. Congratulations, you have completed the quest!

But wait, there's more! Talk to Daero, who tells you that the training programme should hardly take any time at all to do. You can select to train on "strength and stamina", which is strength and constitution, or "attack and defence". You get 35K XP in the skills you chose, and 20K XP in the two other skills. 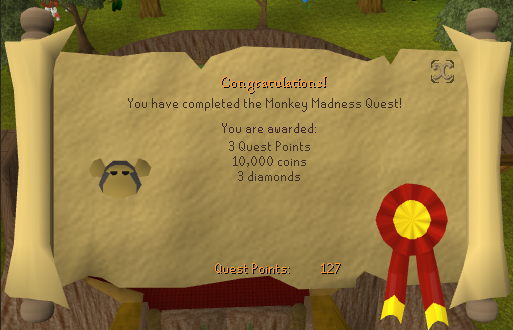 If you happen to lose the sigil you can get another one from Waymottin, one of the gnomes near Zooknock the mage, who is found at the end of the dungeon.