Speak with Sumona, in a house just south-east of the Pollnivneach house portal. 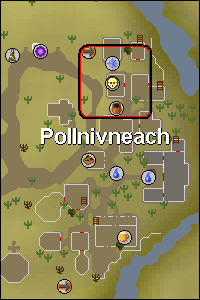 1.1) Start the quest by speaking to Sumona in Pollnivneach, she is found just southeast of the POH portal. Agree to help save her sister, and then walk to the well just south in a small courtyard. 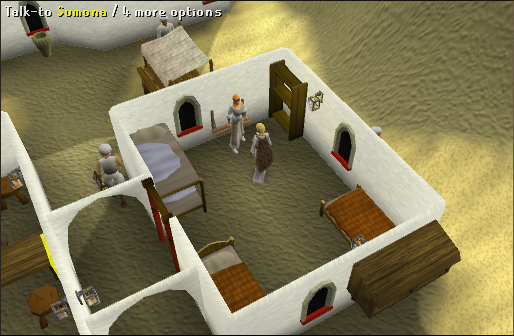 Put on your Amulet of Catspeak, and attempt to climb down the well (single click). You will be stopped by Ali the Cat. He will warn you that you are ill equipped to survive in the well, and that you should seek out Catolax, a long-dead slayer master, to create the necessary equipment. Bank and withdraw your Amulet of Ghostspeak, some food, your cat, and if you have one, a Pharoah's sceptre. 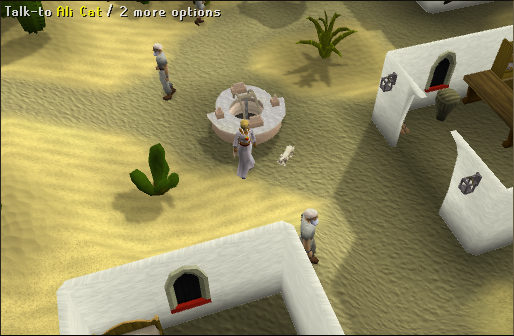 1.2) This part will require you to go to the swampy area to the southeast of the Agility Pyramid. If you have a Pharoah's Sceptre, you should now teleport to the Agility Pyramid. If you do not have one, or do not wish to use it, you may take the carpet in the south of Pollnivneach to Sophanem, and alternatively if you have completed Spirits of the Elid, you may wish to use the carpet to Nardah, as the bank there can be quite convenient. Whichever route you chose, you must head south until you reach a shore. 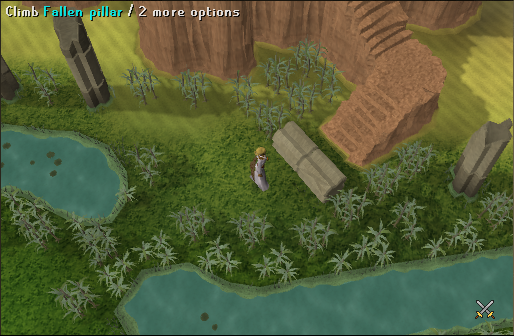 Move east along the shore until you reach an opening in the canyon wall. Continue through, pushing through the brush, until you come to a pillar in front of some steps. Be careful, there is a Scabara there that can hit fairly hard, but it's easy to avoid him. Climb up the pillar, and move up the steps. Run north past the archaeologists, and into the room with the mummies. They can hit very hard with melee, so prayer is recommended. Use the first door on the left (sealed door).

1.3) When you get into the tomb, you will find a pickaxe in the wall next to you. The center path is lined with traps, and you will need to disable them before you can continue. Take it, and head to one of the holes in the sides of the wall. Let out your cat, and search the hole, the wall will then open. When your cat says that it won't come back, don't worry, as this is a joke. You should activate the protect from magic prayer, and run into the room. You will need to break open the damaged wall, but there are three skeletons that will attack you with very strong spells. You can't work at the wall while under attack, but you can run into the room, and work a bit on the wall before they can hit you. After two rounds, the wall will be gone.

Enter the passageway, and walk around the corner. The wall right in front of the door has a trap hidden in it, disable the trap by searching the wall next to it. Enter the room, and you will be attacked by a few skeletons. When they are dead, search the empty alcove, and you will have to fight a level 54 mummy. If you have decent combat stats, this should be a very easy fight. Pick up the key that it drops, and open the locked door on the side of the room. Pull the lever, which will not only disable some of the traps in the center area, it will disable any traps in the area that you are in. Repeat this process for the other side of the tomb, and all of the traps will be disabled. 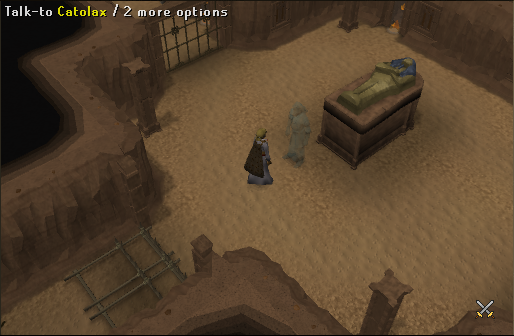 Follow the center path, equip your Amulet of Ghostspeak, and talk to Catolax. He will talk about how he was killed in the dungeon, and he will magically grant you the knowledge to combine earmuffs with a facemask. Following the dialog, simply use your earmuffs on the facemask.

2.1) Head back to Pollnivneach and head down the well. You will need to wear your mask in the following steps. Head north into the next chamber and kill a Mighty Banshee (level 90), pick up the "Banshee Voice" that it drops, and head to the northernmost end of the chamber. 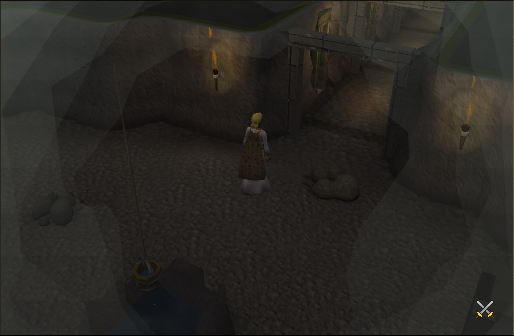 Pass the red field, and you will be attacked by the Banshee Mistress (Level 111). If you walk through the barrier on the westernmost side, you will be safest. Turn on protect from missiles (it's very difficult without it) and turn off auto retaliate. Occasionally, the banshee will knock you down, doing extra damage. When it is at low hp, it will call the Insectoid Assassins (Level 141) to aid in the fight. As long as you don't have auto retaliate on, they shouldn't be a problem.

When you kill the banshee, Jesmona will burn the four assassins to death, and then the book on the pedestal. Return to Sumona in Pollnivneach and receive your reward. 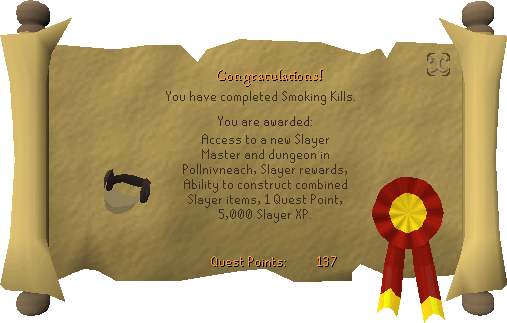