Bring 50 gp (or ring of charos) with you for the beginning; a charged glory amulet would be helpful too. Walk north west along the side of the southern fence of the gnome stronghold to an area with a boat and two people [map].

Talk to Kathy Corkat and persuade her to take you on the boat. Either give her the 50 gp or charm her with the ring. Once there, walk a little north and talk to Herman Caranos.

A Colony in Need

Herman will tell you that the colony has been over run by trolls and that he is in search of an adventurer who will aid him in getting rid of the trolls. Though your offer is a good one, he tells you that he is looking for none other than the Wise Old Man of Draynor Village. He will also offer you to see a cutscene which displays some of the Old Man's previous escapades. It's a good cutscene so see it. Now it is time to head out to Draynor Village (teleport to the cabbage field and walk/run there with the explorer's ring or with an amulet of glory).

The Wise Old Man of Draynor

Talk to him and ask him about the quest. He will agree to go on the quest, but he says he needs supplies. He needs 5 blood runes, 10 mist runes, and 10 lava runes. Get them and give them to him. He tells you to prepare and meet him at the colony. And... whoop! He teleports away. Get your equipment and walk back to the fishing colony.

This time you will see the the Wise Old Man there instead of Herman; talk to him.

Walk in and a cutscene will take place in which a number of sea trolls will come and attack the two of you. Show those trolls what a real adventurer is made of.

Note that the Wise Old Man will run out of runes. When this happens, he will throw rocks or hit the trolls with his staff.

Once you defeat the trolls that come, open the gate and there will be another cutscene. Talk to Franklin to learn that Herman is in the east side of the camp. Go there, find Herman, and talk to him. He will tell you that you need to help prepare the defences of the colony, and that you should talk to Franklin and Arnold.

Franklin is right near the entrance of the colony. He will tell you that you need to replace some of the walls on the western side of the colony. Walk just east of Franklin and pick up the hatchet and pickaxe (keep the pickaxe, you will need this later).

Walk outside of the colony and there will be a mine right near the hole that you must climb in/out of. Mine 5-10 (or more) iron ores and chop down one of the dead trees there to get some logs. Smelt your ores into bars using the small furnace in the room with the press. Use your logs and tinderbox with the firebox at the eastern end of the press. Now use your 5 iron bars with the press to make 5 iron sheets. Watch your fingers!

Remember to talk to Franklin for a hammer.

Go over to the western fence; the fence that needs to be repairs is marked in red on the mini map, just like a door. Use your iron sheets with the broken walls.

Talk to Franklin again when you are done.

Arnold - Fresh Fish
Arnold is easy to locate. He is in the center of the colony, in the building with the bank and store symbols on it.

He tells you that if someone doesn't do something, the colony will run out of food and starve. It's up to you to go and fish some fresh monkfish. He wants 5. Walk to the north-western side of the colony, find the fishing spot, and start fishing with the net provided.

Be prepared to fight since three sea trolls will appear while you are fishing. They are levels 69, 87, and 101. Not much of a problem though.

Get 5 monkfish and talk to Arnold. He wants them cooked so cook them on the range, which is in the south west side of the colony.

Herman and the Wise Old Man say that you need to gather an army for the colony, and that this can be accomplished by talking to the Wizard Frumscone in the magic guild for zombies.

Teleport or walk to Yanille, and talk the Frumscone, he is on the bottom level of the guild.

He will tell you that he won't do it, but he knows someone who will. Frumscone directs you to the necromancer Malignius Mortifer, who is a little south of Falador.

Mortifer will tell you that he will do it, just as long as you bring him some items. The first is 7 normal bones. Go to any place around here for them. A couple of good locations for bones would be the crafting guild cows (west of Mortifer) or the chickens at the farm (north east of Mortifer). Get him his bones and he will tell you the next item, which is a way to carry the bone seeds for the army. He will give you a brown apron for you to wear to get into the guild. If you kept your pickaxe from earlier in the quest, it will save you some time.

Talk to a master crafter to get the answer, a pot with a lid. If the master crafter you talk to doesn't want to tell, ask a different one. Anyways, mine two pieces of clay and make a pot and a lid. Give your airtight pot to Mortifer. He will give you your seeds and whoop! He will teleother you to the colony. Talk to Herman again and the Wise Old Man will ask you if you are ready for battle.

This battle is no joke so bring food, armor, and potions. Don't forget your teleport runes!! A holy wrench, if you have one, would be useful.

A big cutscene takes place of the last battle between you and your army and the trolls. The summoned army easily defeats the trolls, but a larger troll general appears.

With the defeat of the general, the biiig, evil troll queen appears. She uses a combination of strong magic and melee so protect from magic and either range (protections a little less necessary) or melee with good metal armor. If you decide to use melee, bring plenty of prayer potions and lobsters+ (sharks are best) and keep your prayer up the whole time. The queen drains your prayer so bringing prayer potions is essential if you're praying.

Once it is dead, talk to Herman. He and the Wise Old Man will both reward you. It's a shame he doesn't give you his hat. Quest complete! 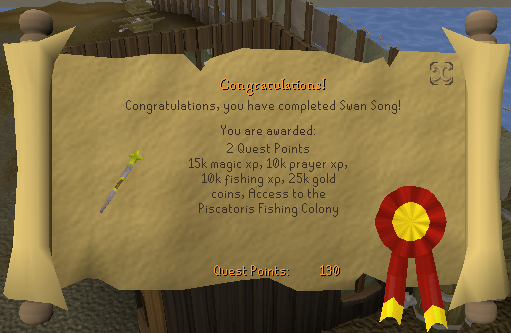