Speak to King Vargas on Miscellania - take the ship from Rellekka. If you have completed A Fairy Tale Part 2, you can use a fairy ring to get there (code CIP).

One or more of the following skills are recommended:

One or more of the following items:

Talk to King Vargas to begin the quest. He is located upstairs in the castle on Miscellania (red circle in the map below). To get there, go to Rellekka and take the boat to Miscellania (green circles). If you have completed A Fairy Tale Part 2, you can use a fairy ring to get there (code CIP). He tells you that he has been cursed and that he needs a regent. To prove yourself, you must negotiate peace with Etceteria. You must also marry a member of the royal family: Princess Astrid if your character is a male, or Prince Brand if your character is a female.

Princess Astrid is in a room just north of Vargas. Talk to her.

Talk to her several times. Always tell her what she'd like to hear. It should be fairly obvious.

When there's no more to say, give her flowers. Then use one of the "dance", "jig", "spin", "headbang" "Zombie dance" or "Snowman dance" emotes, and talk to her some more before you offer her the bow. Continue talking to her and use the emotes, and when she begins to call you "dear", use the "blow kiss" emote, and use the ring with her, and she will agree to marry you.

Prince Brand is in a room just south of Vargas. Talk to him.

Talk to him several times. Always tell him what he'd like to hear. It should be fairly obvious.

When there's no more to say, give him flowers. Then, use the "clap" and "dance" emotes to show that you appreciate his poetry and music. Then, give him your cake. Talk to him more, and give him answers that will please him, and use the emotes. When he starts to call you "dear" or "darling", use the blow kiss emote, and then use the ring with him, and he will agree to marry you.

Go to Etceteria, and talk to Queen Sigrid. She says that peace sounds like a good idea, but she'll only agree if King Vargas recognizes Etceteria as a sovereign nation.

Go back to King Vargas, who will say he will recognize her country once she changes the Etceterian national anthem.

Head back to Queen Sigrid, who will recite the anthem. She'll realize that it's a bad anthem, and will ask you to find a bard who can make a new one.

Head back to King Vargas, but speak with Prince Brand, who is in the room just south of King Vargas. He'll compose an awful anthem. Bring it to Advisor Ghrim (in the same room as King Vargas), who will turn it into a good anthem.

Bring the anthem back to Queen Sigrid, who will like the anthem and give you a signed treaty which King Vargas will also have to sign.

Go back to King Vargas, who says that you will need to find a bigger pen so he can sign the treaty.

To get a bigger pen, head to Derrik, who is in a small house on northern Miscellania. Tell him that you have a strange request, and he will give you a giant nib. Use the giant nib with some logs to get a giant pen.

Go back to King Vargas to give him the pen. He will say that the population is not very supportive of having you as their ruler, so you need to gain their support.

Get the support of the population

You can talk to the villagers at any time to see your approval rating. 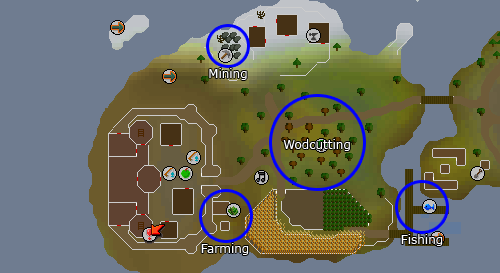 Once you have 75% rating, go back to the castle and speak with King Vargas. You will become regent and complete the quest. Congratulations! 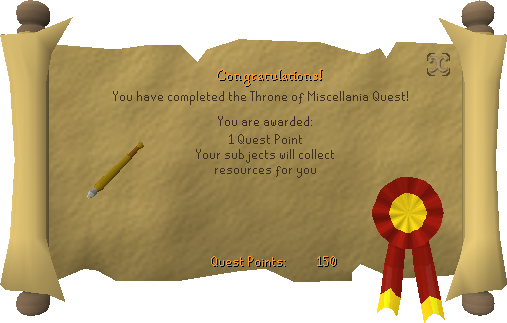