You need to talk to each of Dimintheis' sons.

1. The first son, located in Catherby.

He is a chef, cooking in one of the houses to the north. He will tell you that each son has one part of the Crest, and he won't give you his until you get some fish for him. You need to give him 5 cooked fish; one Shrimp, one Tuna, one Salmon, one Bass and one Swordfish. After you return the fish you him, he will hand over the crest piece.

2. The second son is located north of g:Al Kharid in what's known as the 'chasm'.

To be able to talk to this son, you must first talk to the gem trader in Al Kharid. The son will require that you bring him a 'perfect' Ruby Ring and 'perfect' Ruby Necklace, make from the 'finest gold'. He tells you that you must go to the Dwarven mine, and talk to someone called 'Boot'. Boot will tell you that the gold can be found in a dungeon east of Ardougne. Locate the ladder, and descend into the dungeon.

The Dungeon: This area is a mini-puzzle, which takes a while to figure out. Here's what to do:

You will now be able to enter the caged area. There are hellhounds (Level 114) inside so beware. There are gold rocks in here. You mine them to get "the finest gold". Remember that you need to have spoken to Boot before you can mine these rocks.

Use "the finest gold" and make the jewellery that the son needs. Give it to him. He will give you a part of the crest and inform you about the last son.

Here is a picture of the gold rock. It looks like any other gold rock, its just that its gold is one of a kind.

3. The Third Son. Located at the Jolly Boar Inn, which is east of Varrock castle.

This son is poisoned, so he asks you to give him an Anti-poison potion. When you ask him about the remaining piece of the family crest he tells you that a demon called Chronozon (lvl 170) has it. You are going to have to kill it to get the last piece.

Chronozon must be killed by casting all 4 'Blast' spells (Fire, Water, Air and Earth).

Before entering the dungeon at Edgeville, be sure you have Anti-Poison potions on your, as there's Poison spiders to get through. After you kill Chronozon, he will drop the last Crest piece.

4. Put all the pieces of the crest together and return to Dimintheis. You will be rewared with a pair of Steel gauntlets. 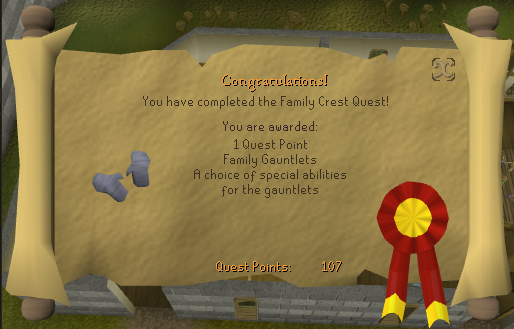