Magic is a combat-based skill in which you cast spells which aid you through the game. Unlike all the other combat-based skills (the ones that raise your combat level), it is the only combat skill in which non-combat activities take a major part. To cast any spell, you will need 'Runestones', normally abbreviated to 'Runes'. When casting a spell, a set of runes is used. To find out which types of runes exist and where to get them, refer to the section on runes below.

Combat spells are used to deal damage on your target, hold them from moving/teleporting and to affect their in combat stats a negative way. As your magic level gets higher your spells will be a lot more accurate and you will be able to cast more damaging spells, not to mention that you'll have higher defence against the offensive spells that are casted on you by foes. Robes and armours may be equipped to enhance the accuracy of your spells, but take into account that they will leave you exposed to ranged attacks.

Non-combat spells are used to convert them into gold pieces, aid others around you and to teleport around the game, which will help cut down amounts of time wasted walking.
For members, there are two additional spell books called Lunar magic and Ancient magicks that can be activated after completing certain quests. You can find the guide for Ancient magicks here.

Runes play a vital part in Magic - they let you cast spells. You need a set of runes for each spell cast, meaning that each time you cast a spell, the runes needed for that certain spell will be used up.

Every single spell in the normal book except the Slayer Dart require at least one elemental rune to cast, making them the most used runes in the game. Refer to the section below for information about how to obtain the runes.

Runes can be obtained through a number of ways. These are:
In the table below, the prices for Varrock, Port Sarim and Mage Arena shop is listed. If you want to see the prices in the Wizards' Guild, refer to our Wizards' Guild Guide.

NFS = Not For Sale 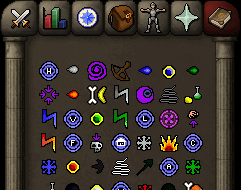 The figure to the right shows what you would see if you opened up the Magic interface in the game.

Damaging spells such as Blasts, Waves, Surges or Slayer Darts have a base experience, and 0.2 extra XP will stack on it for each life points' damage you deal to your target. So if you hit 50 in one spell, you will get the base XP + 10XP. Also, you will get 1/3 XP to your Constitution for each damage that you inflict. If you use the defensive autocast, you will receive 1/3 defence XP for each damage dealt, and will get less magic XP. In other spells that don't deal any damage, there is a standard XP that is the same all the time.

Here is a table of all spells in the normal spell book. It shows the experience earned for each spell cast and the runes needed.

There are many different types of spells, and in this section, you will find information about each type.

The missile spells are most likely the most common use of magic in RuneScape. They are used in direct combat to damage your opponent, but can in some cases fail to deal any damage in the same way as Ranged or melee combat. There are several types of missile spells:
• Strike

Strike, Bolt, Blast, Wave and Surge are elemntal spells that use air, water, earth and fire for wind, water earth and fire spells, respectively, and work like arrows used in ranged. Wave and Surge spells are members only.You no longer need a staff to auto cast a spell. All you need to do is simply select the spell you wish to use, a little white box will appear around the spell you selected and away you go. To stop auto casting just select the same spell and that little white box will disappear.
Crumble undead is used against undeads: zombies, shades, skeletons and so on. It will hit harder than normal spells, but the only staff you can use auto-attack with, is the slayer staff, which requires level 55 Slayer and level 50 Magic and it's members only.

Magic dart is used in kill Turoths and Kurasks, two slayer creatures and it is heavily used in Barrows. To use this spell, you must wield the slayer staff.

These spells are not the most interesting, nor the most used. They lower the target's attack, defence or strength level depending on the spell used. High level curse spells are members only.

Using the jewelry enchanting spells, you can enchant rings, amulets and necklaces of all gems. These items must first be crafted, and the enchanted items all have different uses.

These spells prevent the target from moving. This is particularly useful in PvP situations, such as Bounty Hunters or Castle Wars, where you can use magic spells on another player that uses melee. You can also use these spells when you are trying to escape.

Alchemy is a spell that converts items into gold. A certain amount of money has been assigned to each item; however some items cannot be alched. To find out which items you can perform these spells on check our Item Database. Obviously High Level Alchemy will yield more money than Low Level Alchemy. High Level Alchemy is one of the most used spells in both F2P and P2P.

Teleport spells are one of the most useful spells. Using these spells, you can teleport to a specific location from anywhere if you have the required level and the runes to do so. However, these spells can not be used in Wilderness level 20 and above. All teleport spells need one or two law runes, which can be a little expensive for some players. However, other players would never walk from Varrock to Falador, they would just use the teleport spell.

spells are very similar to Teleport, but you won't teleport yourself. When you cast this on a player, inside or outside the Wilderness, a pop-up will appear on the target's screen, asking the player if he wants to teleport or not. If he declines, he will stay where he was, and if he accept, he will be teleported to the location you chose. You will get XP in both cases. These are members only.

allows you to take an item that you can see, but can't reach. If you are fighting a monster behind a fence or on an isle, you can get the items using this spell. When you cast it on an item, you will grab it magically, without having to move. So if you for instance fight the Lesser Demon in the top of Wizards' Tower south of Draynor, and it drops a rune med helm, you can just use telekinetic grab to get it!
Also, this spell is useful in the Dragon Slayer quest, since you don't need to pay 10K to the goblin with the map (refer to our Dragon Slayer quest guide for more details).

This spell allows you to smelt an ore without a furnace. This means that you could stay in the bank wielding a fire staff, with some nature runes the ore in your inventory, and then you just smelt it in the bank. This is a very useful spell, and you will get both Magic and Smithing XP when using it. However, this spell cannot be used on bars, such as silver bars, gold bars and steel bars. Also, you must have the required smithing level to smelt the ore.

All of these spells needs a staff in addition to a rune. Iban blast will need the Iban staff, Claws of Guthix will need a Guthix staff and so on. To get the Iban staff, you will have to do the Underground Pass quest. To get one of the god staves, you will need 60 magic, enter the Mage Arena in the deepest Wilderness, get the staff of your choice, and cast the spell 100 times in the arena. When you have done this, you will be able to use it outside the arena.

When making battlestaves (refer to our Crafting guide for more information about this), you will need to enchant the orbs before you attach them to the staves. This can only be done by going to the obelisk that corresponds to the orb you want to charge, and use the correct charge orb spell. You simply have to cast it on the obelisk to charge the orb.

In addition to the spells above, there are some other spells too:

There are many different staves, and they have different effects. They are only useful if you use magic spells, as their melee stats are quite low compared to other weapons.

We'll start with the basic staves, which can be bought from Zaff in Varrock. Also, members can buy battlestaves and the elemental staves in the Wizards' Guild.

In addition to the regular staves, there are special staves, and all of them have special effects. All of these are members only.
Note that elemental battlestaves aren't listed here, since their effect are the same as the Elemental Staves.

Below, there is a table where you can see the stats of each staff when wielded. Elemental staves are air, water, earth and fire staves.

Mages have a large selection of armour, most of them being members only. They all have their strength and weaknesses, and most of the armour types are listed below.

The Wizard's mind bomb temporarily adds 3 levels to your magic level. It can be useful if you want to teleport and your level is 1-3 levels below the required level. It can be bought for only 2gp in Falador Inn and Burthorpe Inn.

The Magic Potion is made in Herblore, and gives temporarily 4 levels to your magic level. It is more expensive than the Wizard's mind bomb, but you can have up to 4 doses in one vial. Guide credits
Written by: Aliensvortex
Special thanks to: Sk84ever159, [M]ike, Predator, Chokelius, Syntax Error, Deathen Shada
Last update: 13-Oct-2010 22:36 by Deathen Shada