Firemaking is one of the more common skillcapes you will see around Runescape. It is an easy skill, involving only logs, a tinderbox, and a decent amount of time and patience. There are a few different ways we want to show you how to save money, or shorten the time it takes to get 99 Firemaking. We'd also like to go over the different locations that are best for training. This will include both F2P and P2P locations.

Firemaking is used to light a few things including logs and light sources. It is closely linked to Woodcutting, as you can burn the logs that you cut. As you level up, you'll be able to burn higher level logs. The fires that you light can be used in the Cooking skill and several Quests. A little bit of Firemaking is currently the most effective way to train Cooking in F2P, as the ranges in that version of the game all require a bit of walking to and from the bank.

These are the four methods we will cover in this guide to get you to your desired Firemaking level and get the prestigious skill cape. The beginning methods are usually all the same due to level requirements, but here it is:

The best thing to do while starting out is to burn normal logs until 15. Logs are easy to get; you can get them from the GE, by cutting trees, or buying them from other players. It will take you around 61 normal logs to get to 15. At which time you can then burn Oak logs. This is for both F2P and P2P.

You did it! You got to 15 Firemaking. Now you can burn Oak logs. It's recommended to use Oak logs instead of regular logs because it gives you more experience per log. Use the Oak logs until level 30. Once at level 30 you can then burn Willow logs. It will take 183 Oak logs to get from 15 to 30. Again, both are for F2P and P2P.

Now you are at level 30 Firemaking! You can now either burn Willow logs to 99 or your set level to save cash. Now, if you just want to burn out those levels then it's recommended to use Maple logs, because they give more experience then Willow logs but it will be more costly.

You're getting there, you are almost at those higher levels. What you are going to want to do is to burn Willow logs until 45 where you can then burn Maple logs. Willows is a popular choice for the lower level firemakers. What many people do is cut the logs in Draynor and then burn then outside the bank. To get to 45 you are going to have to burn 535 Willow logs.

This is the method you want to use if you don't have a lot of money, but want a high Firemaking level and you do not care how long it takes. To get from 30 to 99 Firemaking you will need to burn 144,679 Willow logs. Now this is a lot more than the method below, but it's fairly cheaper. In the end, it is your choice what method you want to do, but method number one is the cheapest method to do.

The big 45, you can now burn Maple logs. This is a popular choice for people who have money and don't want to spend time to burn many logs. Many players choose this method. To get to 99 you are going to have to burn 96,195 Maple logs. Now that may seem like a lot, but it costs a lot less than the next method.

This is a method for if you are a rich person who hates training Firemaking and just wants the cape. From 60-99 you will need to burn 63,016 Yew logs, which is a lot less than the needed amount for Willow logs or Maple logs, but it will costs much much more. To get 99 Firemaking, you will need to spend about 32 million gp. For free to play players this is the highest level log you can burn.

If you are in a huge hurry to get your cape and have enough cash, then this is the method for you.

From 75-99 you will need to burn 42,905 Magic Logs, which is about half of what you would burn if you did Maple logs. But remember it is much, much more expensive. It will cost about 62 million gp for 99. In this guide, this method isn't recommended unless you have money to waste.

The second thing we are going to cover is location. This is all about where you are going to go to train your Firemaking quickly without having to move around too much. The locations are in straight lines in order to speed up the process. There are not many such places around RuneScape, as most locations will have something blocking you, forcing you to move to either side to keep burning. Therefore, without further ado, we give you the currently known, best locations for Firemaking!

Draynor Village is a small peaceful town, containing a Master Farmer, the Old Man and a Witch. It is also a favorite spot for Firemakers. With its long straight entrance, both into the town and its market, it offers you a good spot to burn right through. Some players like Draynor all the more because if you choose to do Willows, you can just cut your own logs instead of buying them. 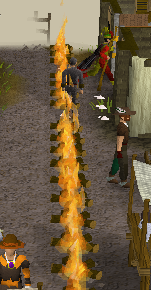 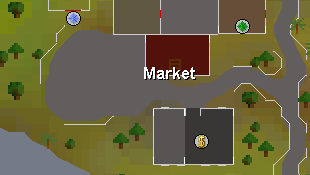 Edgeville is a town just north-west of Varrock. It's a small, spaced out town that offers a great walk for Firemakers to crouch along, and burn their logs. Seeing as it is so close to the G.E, there are commonly a decent amount of people there running over to and from the Grand Exchange. It offers the same buying ease of the G.E with less the noise. In most cases it is favored over the Grand Exchange. 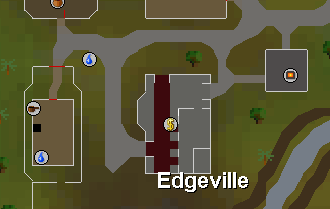 Fist of Guthix is a F2P and P2P minigame. It is located in the Wilderness, so beware of Revenant Ghosts on your way. FoG, as it is more commonly known, is the BEST currently known spot for Firemaking. It is quite secluded, not commonly used (unless you're on a FoG world) and offers a wide space for which you can burn your logs in peace. Because Revenants cannot get inside the waiting area, it is completely safe. The banker does wander around, so some may find this irritating and may prefer a stationary bank. Should you have Brawling Gloves, this site offers quick access to the wild for the double xp. 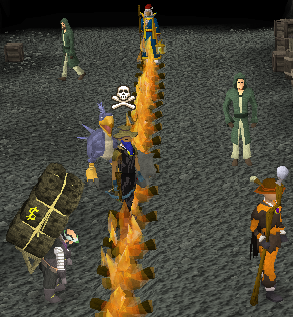 The Grand Exchange is the next stop in our list. Loved for its ability to just buy any extra logs needed and finish off those last levels. It offers quite a large area, in which many fellow pyros may train the skill with you. The Grand Exchange, being as it is, can sometimes be quite crowded and many players may find it quite annoying to fight over places to burn your logs. Due to the large amount of players not to mention the constant chatter. Some may look for a more peaceful, less crowed area like Edgeville or Yanille. 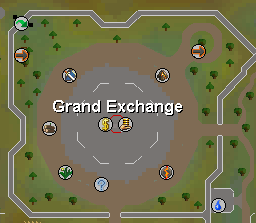 Varrock West Bank is almost like its counter-part Edgeville: it is close to the Grand Exchange. It offers the chance to buy new logs without the insane chat. It is a popular spot, so you will most likely find someone here on your way through to the G.E. Just below the G.E, this place is great if you need some space to get away from all that spam but close enough to get logs if you need them.

Seers' Village is one of the more favored spots for members as it is quite close to both a bank, and quite a few maple trees. It offers both Woodcutting and Firemaking xp. It has a long strip down the center of the town meaning pretty easy burning. Generally has a few people wandering around, but it does have some fellow woodcutters or questers. This place isn't as commonly used by Firemakers, so if the GE or Edgeville is packed, this is a good place to go.

Yanille is another decent P2P Firemaking spot. It has a long entrance, offering easy burning for pyros. It is a bit annoying to get to if the player has not done the Watchtower quest and unlocked the Watchtower Teleport. However, it is quite a peaceful spot, being out of the way as it is.

All boosters are pay to play only.

Brawling gloves don't last forever, and will disintegrate after a certain amount of time spent earning the relevant experience.

The Ring of fire is a handy little ring, enchanted to teach you more of the workings of fire and how best to control it. As a result, you will receive a 2% boost to any Firemaking experience you earn while wearing it. This can be combined with the Flame gloves (see below) for a total 5% boost. You must have a Firemaking level of 62 to wear the Ring of Fire.

The Flame gloves are completely resistant to ordinary flames, enabling you to better manipulate a fire in its early stages. As a result, you will receive a 2% boost to any Firemaking experience you earn while wearing them. This can be combined with the Ring of Fire (see above) for a total 5% boost. You must have a Firemaking level of 79 to wear the Flame Gloves

The Inferno Adze features a blade along one edge, which can be used quite successfully to liberate logs from trees due to the immense heat stored in it. But there is a good chance that it will set those logs on fire. If this happens, you will receive both the Woodcutting and Firemaking experience as normal. If the tree is not the sort to give you logs that can be burnt, the Adze will act as a normal Hatchet.

The Inferno Adze requires 92 Firemaking to obtain, 61 Woodcutting to use as an Hatchet and 41 Mining to use it as a Pickaxe. There are no combat requirements. The Inferno Adze is comparable in speed and efficiency to a dragon hatchet.

To receive XP rewards, you need to have a Penance Horn or a Master Penance Horn in your inventory or bank. These can be obtained for free from Commander Connad, but a master penance horn can only be obtained if you are level 5 in any of the Barbarian Assault roles.

As long as you set the switch in the Barbarian Assault waiting rooms to 'XP', you will find that your penance horn charges up as you play through waves in Barbarian Assault (more charge is awarded for completing the later waves). Right-click and 'check-potential' your horn to see how much charge your horn currently holds.

With charge on your penance horn, you will automatically receive double the amount of XP when completing the following skill tasks:

When receiving double XP from a skill task, your penance horn will lose some of its charge. The amount of charge spent depends on the activity and your skill level. Generally, the higher your level, the longer your charges will last. 'Check-potential' your horn to see how much charge remains, and refill it by playing waves of Barbarian Assault.

There are currently only two Summoning familiars that will assist with Firemaking: the Pyrelord (46 Summoning required) and the Forge Regent (76 Summoning required). To use these monsters, you must drop the log, then right click and choose 'light'. The Summoning familiar will then light the logs without the need for a Tinderbox, and also provide an extra 10xp per log. Not many people choose this option as it can be quite annoying to have to drop the logs.

So that wraps up the firemaking guide; we hope you have a blast burning up a storm. We have covered everything from maple logs to the summoning aspects of the skill. We will be waiting for you to get that most anticipated 99 and cape! Best of luck and have a great time Scapin'!