Hand in the Sand Quest Guide

Chat with Bert on the western part of in Yanille.

1. Talk to Bert in Yanille. This is where you start the quest. 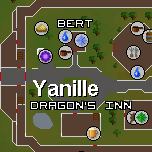 2. He'll tell you about the severed hand he found in his sand pit. You ask him why he hasn't reported this to anyone. Bert will say because the guard captain is a drunk. Of course being the noble hero you are you offer your services to help him. He of course accepts and gives you the severed hand.

3. Head south to the Dragon's Inn. You'll find two people in this bar; A bartender and the drunk guard captain.

The bartender will sell you some cheap Beer for 2 gp if you haven't already bought some one already.

4. You give the drunk captain the Beer and show him the sandy hand. He will though drop the severed hand into the Beer and say its the wizard's fault. So you go and see the wizard.

5. Head to the Wizards' Guild (just east of the Dragon's Inn) and ring the bell outside the doors. A wizard named Zavistic Rarve will appear.

6. Talk to Zavistic and you two figure out that the hand is of one of his most able students - Clarence.

7. Now go to Bert and talk to him. He'll talk about his job, a guy named Sandy (his boss) in Brimhaven, and he'll give you his Rota.

8. Head off to Brimhaven. (Use your Glory amulet teleport to Karamja and head west). You need to find a guy named Sandy. He lives in an extremely small house. It's just south of the Inn, in Brimhaven.

9. Search Sandy's desk and find another rota. And also pickpocket Sandy and you'll get sand. Keep both of these items.

10. Now head to Yanille. Show Bert the original copy of the rota. He'll talk about losing his memory. And apparently the wizards did it. He gives you a scroll.

11. Now make your way onto the Wizards' Guild again. Ring the bell and talk to Zavistic. You'll talk for awhile about Sandy for a bit. Then you talk about Bert; about him not remembering his changed hours. You will show Zavistic the scroll that Bert gave you. Zavistic will tell you that that scroll is used for mind-altering. He then gives you a magic scrying orb and tells you to get some truth serum from Betty in Port Sarim.

12. Talk to him again and he'll teleport you to Betty using one of your Empty vials. NOTE: Make sure you have the Lantern lens, the Redberry, the Whiteberry, the other Empty vial, the sand that you pickpocketed from Sandy, and the magic scrying orb.

13.Talk to Betty. Ask her for the truth serum and she'll give you a bottle of water. She'll ask for you to put a Redberry and a Whiteberry into it. Use the pink dye on the lantern lens. Now it should be a rose-tinted lantern lens. 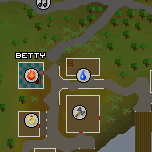 14. Speak to Betty again and she'll ask you to stand in the doorway.

Use the rose tinted lens on the Empty vial on the desk, from where I am standing in the picture.

15. Talk to Betty again and she'll add the sand into the mixture and make the truth serum.

16. Make your way to Sandy. You need to distract him with the following choices.

You may have to do this a lot. I just chose every single one until he was distracted. When you distract him he'll say something to the point of "Oh I gotta see this!" At this point, pour the truth serum into his coffee mug. Activate your scrying orb then talk to him.

17. Now that he has taken a drink of the truth serum he will start telling the truth no matter what. He'll tell you about how he bribed a wizard to put Bert into a memory spell. He then killed the wizard he bribed.

19. After that Zavistic asks you to head off to the sand pit in Entrana. (Don't have any armour or weapons on you. You can have runes though.)

20. Head to the sand pit northwest of the Entrana docks. Find a guy named Mazion. 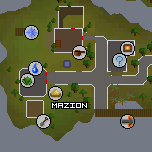 Talk to him and he'll give you a Wizard's head.

21. Head back to the Wizards' Guild, ring the bell again and talk to Zavistic. Brent recieves a big cash pension for his troubles so he doesn't have to work anymore. Sandy is in the slammer. 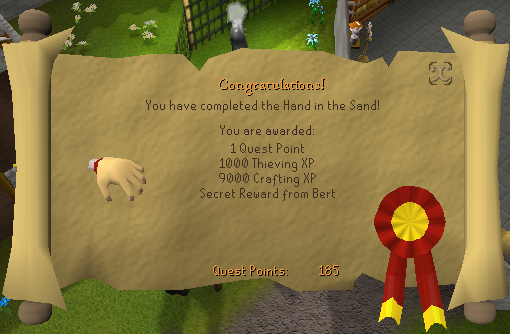 22. WAIT! What IS Bert's secret reward? Well, Bert lost his beloved job (and got some serious cash), so now he has nothing to do. Talk to him and you will work out an arrangement where he'll give you 84 Buckets of sand a day. All you have to do is chat with him each day and he will send them directly to your bank.