After completion of Underground Pass, you will eventually receive a message (an npc will deliver it no matter where you are, and when seems completely random) requesting your services once again. Read the message and head for King Lathas in Ardougne Castle. He'll have you travel to the western lands to defeat Tyras once and for all.

Speak to King Lathas upstairs in the Palace in East Ardougne, who will tell you what you need to do.

You're going to need a few supplies for this quest, and banking will not be convenient until much later. You'll need to bring:

Going through the underground pass

1. Pray at the altar at the end of the pass if you don't have full prayer points; you'll need them later. Exit the cave, and an elf will greet you.

2. Follow the path (see map below), heading southwest and avoiding traps (click the leaf trap to jump over it and click the stick trap to avoid getting hurt), until you reach an elf camp.

3. Before speaking to Lord Iowerth, grab the empty pot in the hut if you need one. Speak with Lord Iowerth, he'll know who you are and why you're there. He'll send you back to the Tracker.

4. To reach the Elf Tracker, go back where you come from, but when you reach the spike trap, continue to the south. The tracker refuses to talk with you. 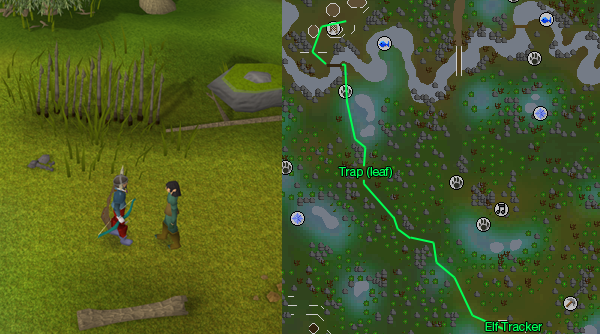 5. Go back to Lord Iowerth, and he'll give you a crystal pendant for identification. Head back to the Elf Tracker, who will recognize it, and tell you to check the area to the west.

6. Go just west of the tracker, and you should see some tracks. Try following them, then tell the Tracker about them. He'll enable you to pass dense forest.

7. You're about to engage in the only real fight of the quest, so be ready. You'll be up against a level 110 Tyras Guard. He has a halberd, so even if you find a usable safespot, he'll be able to hit you. He hits quite well for his level, so protect from melee is recommended. He should go down pretty quickly against decent combat levels. To get to him, pass the dense forest near the tracks you just found.

8. Head northwest, and watch out for the tripwire trap! This will damage (100 lp) and poison you (a weak poison hitting 20) if you fail it. Should you fail, just take a sip of antipoison and you'll be good to go.

10. Speak to General Hining. When you've spoken to him, pick up a few barrels. Head back to the tracker.

11. Go south from the tracker, and use your barrels on the tar to get a barrel of coal-tar. Then, take a piece of sulphur, and use the sulphur with your pestle and mortar to get ground sulphur. You're going to need these later.

12. Head back to Lord Iowerth (check the map in step 4 if you can't remember the way) and tell him what you've learned, and he'll instruct you to build a bomb. He'll give you a book detailing the construction of such a bomb, read it momentarily (you don't really need to know what's written in it, but for the story to advance you must read the book).

While you're at the camp, kill a rabbit for the upcoming steps. They're located to the northwest, near the fishing spot. Cook it in the camp for convenience.

13. Time to build a bomb! The first thing you'll want to do is get to a bank (Falador is convenient since you'll be going to Rimmington). You're going to need:

14. Head for the chemist in Rimmington; he's in the house with the green Achievement Diary icon. Ask him about your quest, and he tells you to use the fractionalizer outside.

Add two or three pieces of coal to start off, and slowly add coal to the machine every few seconds (one piece of coal will greatly increase the temperature. Keep the temperature in the green and white, do NOT add coal if the ticker shows green.). Keep this up until the "amount distilled" bar is completely green. You now have some naphtha.

15. Go to any furnace. Use your limestone with it to get quicklime.

Needed items for the next steps:

17. Time to use it. You have to go back to Isafdar, and you have two alternatives:

18. Make your way to the catapult, located just north of Tyras Camp. Use (don't left-click to eat!) the cooked rabbit on the npc guarding the catapult, he'll leave you in charge temporarily. Use your bomb on the catapult (make sure you have a tinderbox in your inventory) and a cutscene showing the destruction of the camp will commence.

19. Head to the Elf Camp to tell Lord Iowerth the news, he'll give you a message to give to the king and access to a new route into the western lands (you may take this route back to Ardougne, but it is still quite time consuming. Teleporting to Ardougne is recommended.).

20. Once you're back at Ardougne Castle, an Elf will appear with forbidding information. It turns out that you've been working for the wrong side; King Lathas is plotting to bring Lord Zamorak to the realm of RuneScape! You'll be told to return to the king as though nothing unusual has happened. Do this, and the quest will be over. Congratulations! 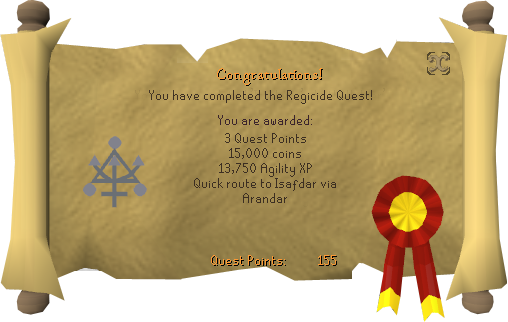 In addition, you get the following additional abilities: