Ranged is a great skill for fighting, because it allows you to attack someone from a distance and them not being able to attack you. This is also a free skill, but there are items only members can equip.

If you are a member, you can also fletch bows and arrows. See our fletching skill guide for more info.

Bows are the most used Ranging weapons in RuneScape. There are two types of bows:

Shortbows
Shortbows are for close ranged attacks. If you are just starting out training ranged, it is usually best to use shortbows for a while.

Longbows
These are for long ranged attacks like from one side of Varrock centre to another. If you are attacking someone from long range distance you should use this, it has more accuracy and will hit more on long ranged shots.

Ogres Bows (Members Only)
Ogre Bows can only use Brutal or Ogre arrows.

Elven crystal can be grown into different items, like Crystal Bow. When the Crystal Bow is new, you can trade it, but once you've started to use it, it forms itself to the player, making it untradeable. This bow doesn't require any arrows, and it will become weaker as you use it. After 2500 uses it returns to the original state of Crystal Seed.

This bow has 10 phases to go trough before it returns to the original state. As stated above, it will be weaker and weaker:

There are seven types of regular arrows, one for each of the basic metals: Bronze, Iron, Steel, Mithril, Adamant, Rune and Dragon. Only members can use the Rune and Dragon arrows. The better arrows you use, the better bow you need.

Also, members can poison all arrows with weapon poison. Read more in our Herblore guide.

There are four kinds of Crossbows. Only the normal crossbow and Phoenix crossbow is available for free players. The advantage in Crossbows is that you can wield a shield in addition to your crossbow.
The disadvantage is that the crossbow is much less accurate, so you will hit more zeros. However, when they hit, they can even hit more than their corresponding arrows (look at the bolts table).

* Must have completed The Knight's sword.

Bolts are made by players using the member's fletching skill, they are also dropped by different monsters such as Iron dragons etc. To tip bolts you must use a chisel with the gem of the tips you wish to make, to make that gems tips, e.g Emerald tips, then use the tips with your bolts. The bolts must be compatible with the tips. Barbed tips are avalible from the Rangers' Guild ticket salesman. To make silver bolts you must use a silver bar on a furnace whilst you have a silver bolt mould in your inventory. All bolts can be poisoned using weapon poison or super weapon poison just like arrows!


* Can only be used with Karil's Crossbow

Some bolts when gem tips have been added and they have been enchanted using the level 4 "Enchant Crossbow Bolt" special have effects which can drain, hit higher, etc. When you use the spell, you will be able to select which type of enchantment you wish to use. The better the enchantment is, the higher magic level you need. Note that all enchanted bolts are untradeable. 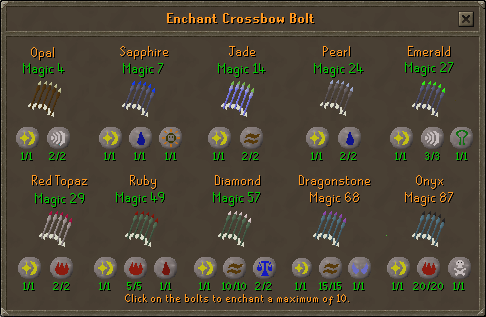 *= You can get these from looting killed Burthorpe guards

Everyone can use leather armour.

Dragonhide items are much better than normal leather items, but they're more expensive, and they are harder to get.

They all need 40 defence to wear, but also require a ranged level depending on its colour:

Karil the Tainted's set is a members only set of ranged armour with large bonuses. 70 defense and 70 ranged are both required to wear it. Note that if you wear the full set (chest, leg, helm, bow) you have a chance to temporarily drain an target's agility level if you hit them. It also loses durability over time, taking a total of 15 hours in combat to break it. You can repair damaged pieces at a few blacksmiths in Runescape or at an armour stand in a house.

The Dwarf MultiCannon is a powerful ranging device allowing you to fire cannonballs (made in smithing by smelting steel bars while having a cannonball mould in your inventory). You have to complete the Dwarf Cannon quest before using it.

The cannon can hit up to 30 hp at once, but the higher ranging level you have, the better will the cannon hit: If you are level 1 ranging, you will mostly hit below 10, if you are ranging level 60, you will often hit over 20.