Back to my Roots Quest Guide

Speak to Horacio in the Handelmort Mansion, East Ardougne.

1. Talk to Horacio, who's in the Handelmort Mansion garden (just above the estate agent) in Ardougne. Choose the following options:

2. Talk to Wizard Cromperty, located north-east of the market square. Choose "Talk about Back to my Roots," then go through the dialogue.

3. Talk to one of the RPDT employees directly south of the southern bank. Open the parcel on the table after you talk to him.

4. Go back to Wizard Cromperty taking out Soft clay from the bank on the way. Choose "Talk about Back to my Roots" again.

5. If you have a skull sceptre or a charged necklace of skills, teleport to either Barbarian village or the Crafting guild. If you haven't brought any of these items, go to the nearest potter's wheel.

6. Use the soft clay on one of the potter's wheels, then use the unfired pot lid in a pottery oven.

7. Teleport or walk to Ardougne and go back to Wizard Cromperty. Same as the last time, choose "Talk about Back to my Roots."

8. Pay 30 coins (15 with Karamja gloves) to Captain Barnaby on the docks located south-east of the market square to go to Brimhaven. Alternatively, you can teleport to your house if it's in Brimhaven already.

9. Talk to Garth near the fruit tree patch in Brimhaven. Choose "Talk about the Back to my Roots quest." 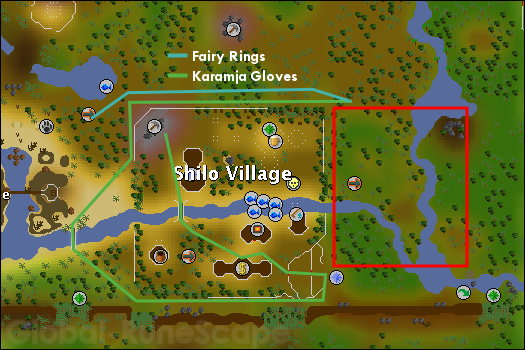 11. The below is a step-by-step guide to the maze:

12. Dig one of the loose soil and cut the roots. Use the root cutting on the plant pot. Keep doing this until it survives; it usually takes around 5 tries. Once it survives, dump the plant pot with the cutting in it to a Pot, and it will be automatically sealed with the lid.

13. Teleport to Ardougne and restock on food and prayer potions. Withdraw secateurs, gardening trowel. You will be using your hatchet for this fight since the monster can't be attacked with any other weapons.

14. Talk to Horacio. When you're ready for combat, use the sealed pot on the eastern Jade vine patch. It will trigger a cutscene, followed shortly after by a fight.

The vine will use ranged and melee attacks, and both of them will (7) poison you. Pray and chop, then deal the finishing blow with your secateurs.

15. Talk to Horacio for the last time, you will now complete the quest. 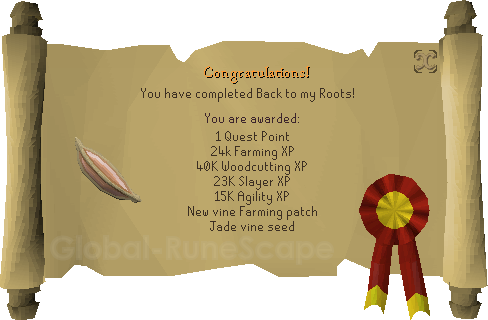