Speak with Captain Rovin in the north-west tower of Varrock Palace.

To start this quest you must speak to Captain Rovin in Varrock castle. He is in the North West Tower of the building. You will be asked to investigate the Graveyard of Shadows. Rovin's scout, Hartwin, will follow you from the Varrock castle.

When you reach the graveyard speak with Hartwin, Rovin's scout. The Graveyard is located approximately at level 20 wilderness. You'll see a cut scene when you speak with Hartwin. After the cut scene you'll find that there are zombie tracks leaving the graveyard. Use the tracking skills you learned from hunting, and you'll eventually find your way down to the Chaos Temple.

• The trails are random and some loop around, but just follow them along as best you can and you'll find your way to the Chaos Temple.

• What you'll need to do here is inspect the trees and bushes and rocks. Each time you'll either extend the trail you're following or find nothing. Just keep looking and you'll find your way.

**Here is a map of the general path the zombie trail will follow. Anything else you may pick up will end in a dead end. 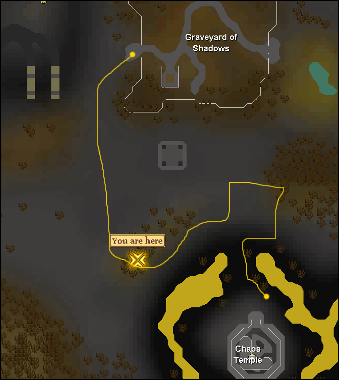 Once you reach the Chaos Temple you'll learn that the trail ends on the hard ground. Look behind the altar up ahead and there will be a trap door. The grubby key will unlock it. Enter it and be prepared for some battles.

Below are Armoured Zombies (level 85) they are aggressive, so be prepared to fight them. Head north up the path and you'll walk into a cut scene (you'll come across a familiar character here). After the cut scene head down the western path where there is a gate.

What you need to do here is pick up three bottles and kill some zombies. The red mist that lingers after they die is needed to open the gate. Collect the mist and use them on the gate. Another cut scene will start. Afterwards, the bottles will have emptied out. Follow the path until you reach another gate.

The same as the first gate kill three zombies and collect the mist. Follow the path further east and there will be another balcony to look down into. Click it and view another cut scene. After the cut scene Hartwin will give you a Varrock teleport tablet. Use it and go tell Rovin what has happened.

After reported the bad news you'll be asked to go find Thurgo in southern Asgarnia. He is located down at Mudskipper Point. Head down there by whichever means you find easiest (Amulet of Glory, Skills Necklace, etc.) And speak with Thurgo.

He'll mention a caved in forge up at the Ice Mountain. You'll be given a piece of paper with the location. Before leaving however, go into the Ice Giant's cave nearby and mine a piece of Blurite ore. Head up to the Ice Mountain and have your treasure hunting tools with you. To make things easier use Global RuneScape's Treasure Trail Locator.

The hole should be near the white tree up on the mountain. After digging it out with your spade and pickaxe, enter it. Another short cut scene and you'll be inside the Ruins of Camdozaal. Here you'll find Ramarno. As an optional sort of side quest, you can give him a redberry pie for 1k smithing experience.

After speaking with him, use the Blurite on the forge. A cut scene will start and you'll find out that Varrock is already under attack. 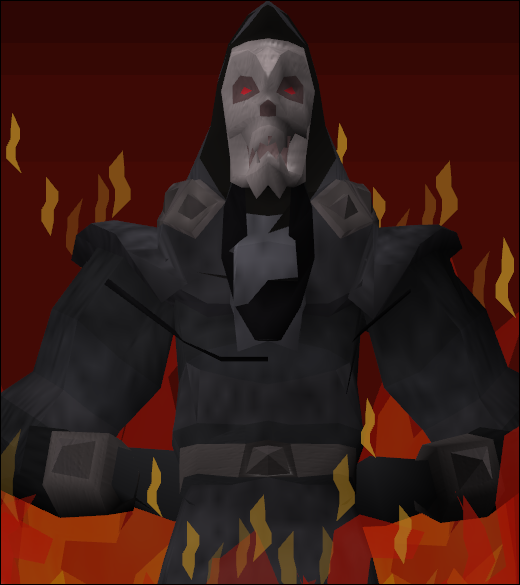 Return to Varrock Castle. Speak with Rovin and he'll give you the Shield of Arrav. Head down stairs and talk to Reldo In the library. He'll tell you of a scroll with the elders of Varrock. There are 7 names on the scroll.

Speak with these people until you find out which person has the ancestor that founded Varrock. Keep trying all of them until one tells that his ancestry is adopted. They will tell you that the last true family was married into the Fitzharmon family.

Go to the gated section of Varrock in the south east where you started Family Crest and speak with Dimintheis. He'll wield the Shield of Arrav and a cut scene will happen. After the cut scene you'll appear with Rovin. Speak with him and finish the quest. 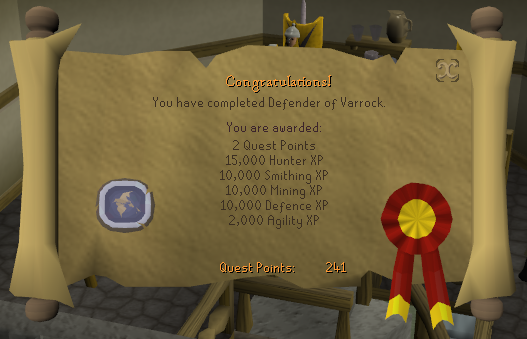 If you take a Redberry pie to Ramarno, the blind dwarf sage, he will eat it all and in return he will give you 1,000 Smithing experience. This can be done either during the quest, or after.